Once in a blue moon I will open a box of old photographs stored on the top shelf of the clothes closet. 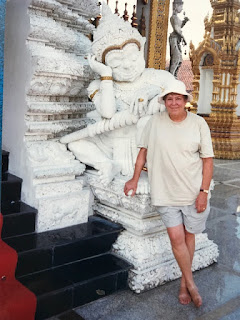 It is awkward to get down and it is stuffed with packets of 4x6’s from the years before computers and it is at times fun and bittersweet to see what I was up to.  I am surprised that my hair was raven colored and I was much thinner than I am now.  There are trips to the mountain to visit friends who had a wonderful cabin in an old mining town, trips to California to go on painting encounters and wonderful sojourns to Italy, France, Africa and Asia.

There I am standing in front of a temple in the sweltering heat of Thailand, then a shot of the most handsome male I ever met, a 70- foot reclining gold deity all stretched out for one and all to admire.  There I am on a small Vietnamese boat on Hai Phong Bay hardly aware that there was an awful war with these people not too long ago.

I am hiking with our guide in the desert highlands of Madagascar and I remember that I suffered heat stroke that evening.  I didn’t have water on the hike into Monkey Valley and I was so thirsty that I drank unfiltered water from a stream. I was exhausted, no appetite, nauseated, and vomited outside the dining hall that evening.

There are photos of friends long gone, others who just drifted away with job changes and moving to another state, photos of people who betrayed their loyalty and I get a sinking feeling when at I look at them.

I think maybe it is best not to disturb that box filled with history. Should I dump it or just let it molder away in darkness? 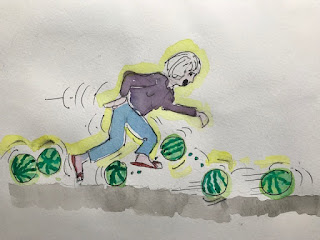 Seattle is very fussy about its trash.  We have containers for recycling, one for composting and one for garbage. In the alley behind my condo complex, our dumpsters are not all together so one has to separate materials to go into three different containers in three different locations.

I had a bag of trash in one hand ready for the garbage and another bag with a whole personal watermelon which had staged its last days in my vegetable crisper ready to add to compost.  I had put it in a bio bag which is a little slick.  Our alley is slightly canted and runs downhill towards the Sound. I placed the bio bag of watermelon down on the concrete while I put the garbage in the dumpster but as I was doing it the watermelon started to roll.

At first I tried to grab it, then it started to gain speed, my sandals were not meant for running so I moved quickly to try to get ahead of the racing watermelon to stop it with my foot but the melon simply bounced over my foot and took off speeding.  I raced along side it to try to move it towards our neighbor building but it was focused on blazing ahead at greater speed.  Realizing I could possibly fall down and knock myself out or fracture an arm I gave myself one more try and was able finally to stop it with one frantic effort it before it bounced into the street.

It was a scene from an Abbot and Costello movie.  I had hoped someone else had observed it and I am still laughing about it.
Posted by Lucy Hart at 3:37 PM 1 comment: