RobertaSue is such a clotheshorse.  Now she is into gloves, can you believe it?  I haven’t the heart to tell her that unless she is European Royal, woman don’t wear gloves any more.  But she is intent on building a huge wardrobe of soft kid gloves in a variety of colors.  Her walk in closet has dozens and dozens of pairs of gloves from yellow to blue to red in all varieties of hues.

She actually wrote a paper on gloves for her high school English class and I give her credit because she did some serious research.  She started out with one of the earliest records of gloves, found, in all places, with the discovery of King Tut’s tomb.  She then mentioned that bishops, royalty and high-ranking men wore gloves too.  There were the serious warrior gauntlets adorned the hands of horsemen to protect them from injury.  She segued into boxing gloves which was a little far fetched, but nothing stops RobertaSue when she is on a charge.

She remembered as a child wearing white cloth gloves to church on Sunday and she was forever losing one or another of them when she took them off in a heated stuffy church.

Her mother, wise to RobertaSue’s careless ways, made her a pair of mittens with a long strand of wool attached so that they were permanently together.  It wasn’t easy snaking the mittens, around her neck, through the long sleeves and onto her hands, but she never lost just one ever again.

One day RobertaSue’s mother gave a tea party for several of her female friends and Hattie Daniels a spry fashionista came wearing a pairs of turquoise doeskin gloves which she left on the chair by the front door.  RobertaSue picked them up and marveled how soft they were, so subtle, and she put them on her hands.  They fit perfectly.  She held up her hands to admire the color and feel of the material.  Hattie came up behind her and said, “RobertaSue, I see that you are admiring my gloves.  It would make me ever so happy if you would keep these for your own. I have plenty of pairs of them at home.”  Well, RobertaSue thought that it was just about the neatest gift she had ever been given. She thanked Hattie for her generosity and from that point on RobertaSue started adding to her collection.

She traveled to Europe and in every country she would seek out the leather shops and find yet another pair to add to her collection.  There is the pink pair from Prague, the red pair from Rome, the black pair from Berlin and the burgundy pair from Brussels.  It was though each pair had a history associated with it.
Posted by Lucy Hart at 11:25 AM No comments:

Let Me Guess Who You Are 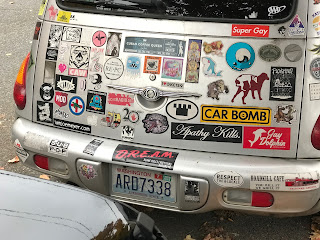 Some people are not a bit shy of telling us who they are.  Their cars are plastered with bumper stickers some times to the extreme.  This person has made their sexual orientation clear, their favorite radio stations, beverages, cafes and coffee shops, political affiliations, conservation interests, conventions attended, favorite dancing styles, art galleries, and taste in reading.  In the old days the only bumper sticker one would see would brag "My kid is an honor student."  Then came the "My kid can beat up your honor student." I think that things have gotten out of hand.