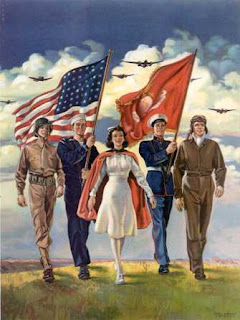 My favorite story that he told us was not a pleasant experience he suffered during the WWII.  He is such a kind man with nerve endings exposed that the fact that he would even tell the story is amazing.

He was in the Battle of the Bulge in December 44 to January 45.  It was the worst winter Europe had suffered in decades.  The American, Allies (and German) soldiers dealt with bitter snow and cold.

Stewart was in the front lines and they could easily see German troops advancing and as trained as an infantryman he used his weapon and fired.  One German soldier went down but was snared by a barbed wire fence and died in that position and was frozen in place.  Stewart could see that grotesque figure for three days.

As he told the story he was not emotional, rather was matter of fact as though telling a tale he had read in a book.  But I knew better.  That experience affected him his whole life and I am sure daunted him to his grave.  He even met with PTSS support group at the Veterans’ Hospital monthly.  There were boys from so many wars sitting on chairs in a circle retelling their experiences in the Korean, Vietnam, Desert Storm and little known wars in Cambodia, El Salvador, Liberia, Saudi Arabia, Iraq, all veterans telling their stories.

Stewart was the only WWII vet and the other younger soldiers must have considered him the wisest man among them and probably considered that their stories would follow them for the rest of their lives, too.

Yet he told his story in his classroom for years as an example of how important it is to get the truth out.
Posted by Lucy Hart at 4:59 PM