If the Blue Angels are so good why do they have to practice?  Those guys are nuts.  They take several  days to practice screaming over Seattle chasing crows out of the trees sending the seagulls into tailspins and the chickadees and sparrows completely disappear. I don’t find this flying team entertaining at all.  And I really think that what people find fascinating about them is the hope just a little bit that they make slip up just once and careen into Lake Washington while the crowd gasps really loudly and the media people go crazy re running the tragedy over and over and in slow motion. 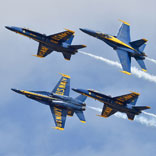 My friend’s dogs take refuge in bathroom tubs cowering, thinking the world is coming to the end.  To say nothing about immigrants who have fled their warn-torn countries to find refuge and peace in the US and then they are faced once a year with a barrage of F/A-18 Hornets, twin engines, supersonic that can go Mach 1.8 and greater.  What that means is that at times during dives the blood can rush to the pilots feet or to their heads.  Imagine shifting all the slosh inside our bodies all our guts and organs rushing to our feet or trying to find room in our heads. What fun is that for a pilot?  And they are so damn close to one another or heading straight for one another at tremendous speeds.

I know the Navy needs a little PR to attract potential pilots but I think there are better ways then 40 million dollars each year to have this demonstration team. I mean things would be different if we were actually in a war and these guys would flying to support the ships.  In 2013 the budget was cut and there was peace and quiet in August in Seattle and I don’t believe for a moment that all our citizens were so disappointed not to see them again.  I have to deal with them every year and next year I will flee to some quiet place like the San Juan Islands.  I won’t choose Whidbey Island because of the Naval Air Station on the island which house tactical electronic attack squadrons of EA-6B Prowlers and EA-18G Growlers. They can really set up a racket, too.  “Pardon Our Noise – It’s the Sound of Freedom”.  Give me peace.