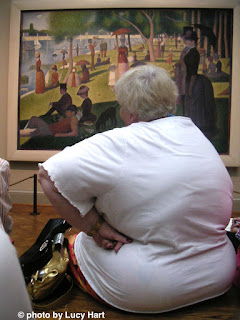 She was sitting alone, grossly over weight, missing teeth but had beautifully manicured hands. She was sitting in front of Georges Seurat’s “A Sunday on La Grande Jatte”, and was transfixed by the painting. Although I wanted to step in front of her to see the detail of the Pointillism brush technique but it would have been rude of me to do so.  I only had a week in Chicago and I was determined to spend as much time as I could at the Chicago Art Institute to see their collection.

I was staying across the street at the Chicago University Club.  This was a trip, a sentimental one, that I had planned for a long time.  My father studied art and graduated from the Institute in 1915 and I wanted to walk the halls, stand in the studios and spend time in the Ryerson Library where he had no doubt studied.  The library was completely restored in 1994.  I was stunned to be able to read the catalogs from the shows offered when my father was going to school there, including the Armory Show of 1913.  I was humbled by the library and felt privileged to be sitting there.

My expectations had to be tempered somewhat by what I wanted to see in the galleries and what was available and on display.  I always have a sketchbook with me to take notes and information to be able to look up later.  On the one hand I was a little irritated that this huge person was hogging the painting but on the other hand it was an chance for me to sit on a bench and sketch her, after all an enfant terrible would relish the opportunity to have a model like this, and would send a fauve into ecstasy. This is what an artist would look for – not the obvious but the subtle layer underneath.
Posted by Lucy Hart at 10:48 AM