For the past several weeks I have been dogged by a housefly the size of a gopher.   It lurks in the shadows and just as I pour my morning coffee in the kitchen it dive-bombs me.  I reach for the fly swatter and it melts into the dark recesses my apartment.  I looked up some facts about flies and learned that they can live for up to 28 days and this one was a granddaddy of them all.

First I put up a sticky fly ribbon hoping to catch him but after three days with no luck I took it down.  Then I went on the #1 website for eliminating flies and found directions to construct a fly trap that they claimed works. 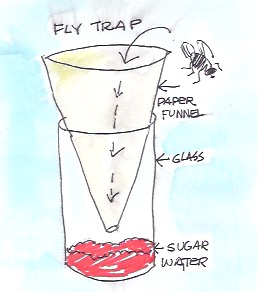 I followed the instructions and made the trap out of sugar water, a glass, and a paper funnel with small hole in it. According to the instructions flies get attracted to food with a sense of smell which is 10 million times more sensitive to sugar than the human tongue.  Flies compound eyes have very bad vision.  The theory behind this home made fly trap is that the fly will be attracted by the sugar, crawl down the cone, drop through the hole into the sugar water, have their fill then because of their bad vision can’t figure out how to get out of the glass and then I supposed gorge on sugar water and are transported into another world in an ecstasy of excess.  That sounded pretty good and pretty humane.  I had that trap out on the counter for four days.  Each morning I would check to see if that huge black critter was belly up in sugar water.  No luck.

I would then try to stand for several minutes with a fly swatter raised in the attack position, but the fly would disappear.  One evening hard pressed for something for dinner I took out a frozen hot dog bun and put it on the counter.  I saw the fly.  Maybe he preferred a bun to sugar and I got out my swatter.  He landed on the bun.  I took one slam and did him in with one blast and he lay feet up on the counter.  I couldn’t believe that I got him after all this time.  He was too wee to be stuffed and mounted on a plaque but I just about felt like doing it.
Posted by Lucy Hart at 1:37 PM