Stranded on the Carousel 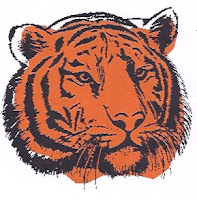 It was a glorious day at the zoo today with temperature in the high 70°'s.  I was busy mentoring two new volunteers, showing them around zoo grounds.  We visited the tapirs, Visayan warty pigs, siamangs, Malayan tigers, sloth bears, Asian small-clawed otters, and penguins when we spotted the beautiful carousel on the grounds.  Thinking it important for these trainees I suggested that we ride on the merry go round to gain the experience.

It is a lovely old Philadelphia Toboggan Company carousel with brightly colored carved wooden horses, shiny brass posts and mirrors to reflect the excited faces of kids having a whale of a good time. The horse I chose was in the "down" position so with some difficulty I was able to swing my long legs over the saddle and straddle the charging steed.  The stirrups were so short that I looked like a jockey at a horse race with my knees practically under my chin.  The carousel started with the slap happy traditional merry go around music which brought back chilldhood memories.  However, seeing my reflection in the mirrors I just looked like a very overgrown "big lady", way too long legged to be on that critter. I was more than a little concerned because when we were in the "up" position we were way up in the air and I noted alarmingly that I was not going to be able to dismount the steed if I was still up that high and not down. 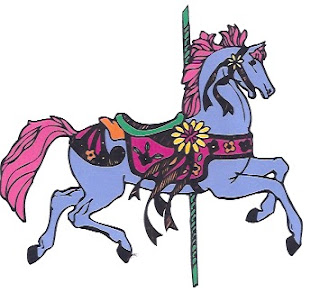 We came to a stop and I was not only in the up position but the way up position and there wasn't a way for me to come down.  I was trapped.   Much to their credit my two volunteers ran over with great concerned and didn't burst into gales of laughter as I would have had the positions been revered.  There I was stranded in the up position while all the other riders had  been lifted off their horses by their parent or were able dismounted themselves. A long line was waiting to get in, but couldn't do it as long as I was impaled on the horse.

The expert carousel operator came to my rescue by slowly nudging the horse down, down to the lowest position and I was able to awkwardly get off the horse but I confess that I was red-aced as I fled the scene.