I had just spent the morning sketching in the Marais, one of my favorite Parisian neighborhoods, and stopped at the Salon de thé Bar on the Rue Vieille du Temple to order lunch at their sidewalk safe.  It was quite crowed so I joined others at a common table and sat across from a rather rotund woman, dressed in a pink dress with chubby fingers wearing lots of rings, some with diamonds glistening in the sunlight. 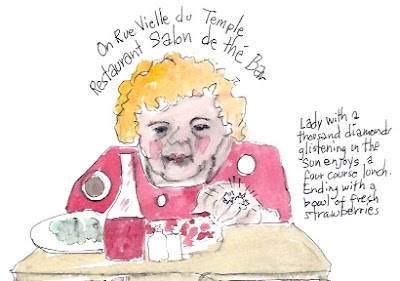 Being on a limited budget I ordered a cafe au lait and a cheese sandwich.

The lady in pink proceeded to order a four-course lunch French with gusto and didn’t pay any attention to the other diners around her.  I had a perfect view of this gastronomic groupie who tore into her meal with complete abandon.

First she ordered a carafe of rosé and poured three fingers of wine into her tumbler and downed it in one gulp.

Intent on her meal land she hardly looked up as she broke the onion soup thick with cheese and bread.  Steam rose from her initial attack at the crust and she slurped the dark brown liquid into pursed lips.  With one hand on the spoon and the other hand holding her baguette she manage to dispatch the bowl with relish.

There followed a small plate of patés, a paté de campagne forrestier with porcini mushrooms reeking of wine and Cognac, and the other one seemed to be duck foi gras which she slathered on bread with a thick knife.

Her main dish was escargot (one of my personal favorites and I frankly had to keep from drooling).  The garlic and parsley sauce bubbled around the small snails tucked into their little round indentations ready to be speared with a tiny escargot fork.  She downed the first one, then dipped her bread into the sauce twice to soak up all the juices.  With hardly a pause she speared the second snail repeating her bread dipping technique, until the plate was swabbed clean.

You’d think at this point she would have swooned over the amount of butter, cheese, fat and trans fats she had ingested but she ended her gastronomic marathon with a glass bowl piled high with strawberries. She very delicately took a spoon of just one strawberry, swallowed it and then spooned another, taking her time to complete her hearty lunch.  At the end of lunch she looked up, rolled her eyes as though thanking Bacchus himself for this culinary extravaganza. I was mighty impressed and promised myself to save up for some escargot sometime soon.
Posted by Lucy Hart at 12:09 PM